FINNEGANS and the MS 150

The FINNEGANS MS 150 Bike Team really upped their game this year. Last year, we had twenty-two people representing our do-gooder beer outfit. This year, we biked more than one-hundred fifty strong, including our very own Jacquie Berglund! We were the 5th largest team and raised over $84,000, putting us in fifth for money raised […] 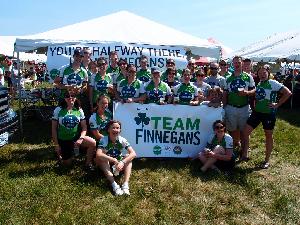 The FINNEGANS MS 150 Bike Team really upped their game this year. Last year, we had twenty-two people representing our do-gooder beer outfit. This year, we biked more than one-hundred fifty strong, including our very own Jacquie Berglund! We were the 5th largest team and raised over $84,000, putting us in fifth for money raised as well!

We asked our team leaders, Matt Bleecker and Mike Watercott, some questions about their monumental bike ride that we here at FINNEGANS will remember for quite a while.

FINNEGANS: How long have you guys been biking this kind of distance? Was there a great deal of training involved to get to the point where you felt comfortable embarking on a 150 mile journey?

Mike: Biking has been a pretty big part of my life for the past few years, so I’m at a point where what might be considered “training” is really just becoming my norm. I currently house five bicycles in my basement, and ride them all! If I were to list the “training” leading up to this year’s MS150 it would include: fatbike riding/racing in the winter, 12 weeks of indoor power training on the road bike in late winter/early spring at Balance Fitness Studio, long road bike rides in the spring while the snow was still melting, and once everything dried out the mountain bike race season began and became my focus.

In years prior when I wasn’t biking as much I simply made it a point to get on the bike with some buddies every weekend to ensure I was prepared for the weekend. (Pro tip: Drinking a beer after each ride is also good “training” for anyone on Team FINNEGANS!) 150 miles over 2 days is challenging regardless of how avid of a cyclist you are, so simply being ready for the weekend is important! I honestly believe that anyone can ride the MS150, it’s the training logged leading up to it that determines how enjoyable (or miserable) the ride can be.

Matt: I started riding this type of distance back in 2005 when I began training for my first Ironman triathlon. Unlike Mike, it hasn’t become part of my regular lifestyle. I typically will only log those types of miles when I have a crazy idea and sign up for another Ironman. Otherwise I just ride my bike for some short training rides; 10 -15 miles. I have to chuckle because Mike had way more training for this year’s ride than I did. I used muscle memory for this year’s ride because I logged only 2 rides before we left for our MS 150 ride weekend.

Training for the MS 150 is more about wrapping your head around the idea of biking for 150 miles over 2 days. Oh and getting your butt ready for that much time in the saddle. The distance is really doable and I often hear that from first timers who were worried about biking 150 miles. It sounds so much more intimidating than what it really is.

F: How did you guys get involved with MS 150? Had you ridden before, with FINNEGANS or another team?

Mike: I’ll let my co-captain Matt tell the full FINNEGANS story. In short: Matt and I rode with another team (our employers team) in 2011. It was the first time either of us had ridden the MS150, and while it was a blast we thought it would be fun to branch out and create our own team. With a lot of inspiration from the Team Summit guys (now on Team FINNEGANS) who kept us hydrated in Hinckley, we decided our new team definitely needed to be a beer team. It turned out Matt had a connection to Jacquie, and he relentlessly pitched the idea to her until she finally said yes! I just rode Matt’s coattails and have really enjoyed getting to know the folks behind FINNEGANS over the past 2 years.

Matt: Like Mike said, we rode together our first year in 2011 on another team. A friend of mine and I decided to ride in memory of his dad who had MS and had passed away that past fall. We had been saying for years we were going to ride in his honor and we decided now it was time to ride in his memory. The event was so well organized and as a group we had so much fun riding together. Needless to say our tent in Hinckley did not have any beer so Mike and some other set out finding us some friends that would be willing to share their “refreshments”.

Forming Team FINNEGANS was spurred from that afternoon in Hinckley. Mike wanted to find a team that would have an awesome tent for us in Hinckley for next year. That got my mind racing on how could we make that happen. Well, one night the idea came to me. FINNEGANS! I needed to get to Jacquie and pitch my wild idea to her. I thought she would buy the idea; after all she is Jacquie who came up with the wild and crazy idea of having a beer company give their profits back to charity. I knew if she would just listen I could sell her on the idea. Easier said than done. I kept emailing her trying to get on her busy schedule so I could pitch my idea. Jacquie kept ignoring my requests. Then I spotted her at a fund raiser and cornered her so I could give her my pitch. I knew I only had about 2 minutes to quickly sell her on the idea. Once I explained who I was, I launched into my sales pitch. Her ears perked up and she asked me to tell her more. I sold her on the concept that night. And Team FINNEGANS was born.

F: You were part of a team of over 150 people. How did you get this many people involved? Did you know many of them, or were there a lot of new faces?

Mike: Honestly, I have no idea! Lots of new faces! It really was a grassroots word-of-mouth expansion: there wasn’t much to it aside from us telling our friends and family, others doing the same, and FINNEGANS hosting a happy hour and emailing their contacts to promote the event. We even had several teams fold into our team. Team FINNEGANS is unique in the fact that unlike most other large teams, we aren’t affiliated with one’s place of employment. Several other teams are corporate-based, while Team FINNEGANS is open to anyone who is a fun person who likes to do-good, ride bikes, and enjoy a cold one! Matt and I thought Jacquie was crazy when she said her goal was 150 riders, but she showed us she means business! I hear she’s targeting 250 for next year….whew!

Matt: Leave it to Jacquie to dream big. She told Mike and I that she wanted 150 riders to match the MS 150 concept. I thought this woman is crazy. We only had 23 riders our first year and now she wants 150-yeah right. But that is what I love about Jacquie; she loves to dream big and show people dreams do come true. Our biggest form of recruiting came from word of mouth. People began to spread the word about how they rode last year and how much fun they had. They quickly told friends and so on and so on. We also hosted an open house at FINNEGANS’ international headquarters where people showed up to learn about Jacquie’s latest and craziest idea. From there is just spread like wild fire.

There were a lot of new faces this year. The great thing about Team FINNEGANS is we are open to anyone and everyone who is passionate about making a difference in our communities. That is the bond that brings our team together. Many of the riders come back each year and it might be the only time that they get together with one another. I love the strong camaraderie the team has and the positive impact we have as a team on the event.

F: Were there any serious hurdles you faced during the ride?

Mike: Speaking only for myself, the ride was the easy part and was relatively hurdle-free. The real hurdle for me was all the time leading up to the weekend, learning how to administer a team that went from 20-something riders to 150 riders. There are a LOT of things that we learned from, and will do differently in 2014 to make the whole experience better for everyone on the team. I didn’t think anyone, Jacquie excluded, really thought we’d grow so fast. Our system to captain a team of 20 clearly doesn’t translate to a team 7x that size. I really hope everyone had a fun weekend being part of the team, but we will come into 2014 with a year of being a “big team” in the books and be better prepared for sure.

However, back to the bike riding part – I’m not going to say Sunday was easy by any means! We had amazing weather on Saturday, only to have a consistent cold rain all day Sunday. I had plans of taking it easy and enjoying the day, but found myself riding as hard as I could just to get it over with and into some dry clothes. It’s a bummer because one of my favorite parts of the ride is that there are often several folks with MS at the lunch stop on Sunday thanking riders personally. It’s easy to get caught up in the details of riding a bike for 150 miles, and I’ve always found lunch in North Branch to be a touching reminder of why we all ride. This year I at my sandwich as fast as possible, teeth chattering, and was back on the road immediately to stay warm. Sunday of the 2012 ride was miserable biking weather also, so hopefully next year we can have perfect days both days!

Matt: The weather can be a serious hurdle. I think back to last year and how hot, humid, and windy it was. I thought what could be worse-then it rained on our Sunday ride this year. It was cold and a little windy but I still think last year was tougher. What motivates me thru those tough times is the cause I am out there biking for. I can quit biking at any time and say I don’t want to finish the ride. However those living with MS don’t ever get to just quit or stop living with it. They have to face their challenges day in and day out. I ride for them.

F: What was the best part of the ride, aside from raising over $84K? Any stories or memories that stick out?

Mike: The MS150 is always a blast full of so many great memories! This year’s highlights:

Matt: All around it was a blast; from the bus ride up to the Duluth area to our tent in Hinckley to crossing that finish line! Each year I walk away with some new memories and new friends that I have made. I love being out there riding and seeing all the Team FINNEGANS jerseys. It puts a huge smile on my face and to see others having a great time and people wanting to be a part of our team. I shake my head and say how did all this really happen? It all happened because I learned to dream big and because a crazy lady was willing to listen to my big idea.